OKAY SO! This is a little late for Yaracchi's birthday, sad :( BUT!

Last time we had YaraRyo's second round of stage photosets, but nobody else's.

This time, we have:

Yuma and Kouta's extra set (the lower numbers) were from the first round of stage photosets - you may remember that Kouta's were sold out when I went because it was his birthday. That is now rectified. 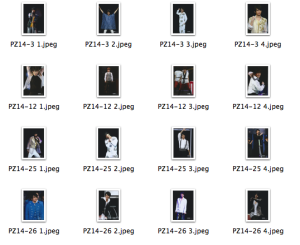 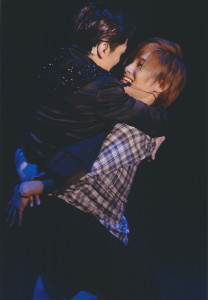 THIS IS THE LAST TIME I WILL BE BUYING & SCANNING ALL OF THE DANCE FAMILY.

As I'm sure you will appreciate, at ¥600 per photoset it's stupidly expensive to keep doing this for 10+ people for every round of photos that they release for a butai, or ¥500 per photo for the larger stage photos that they release for SHOCK. Even though PZ in Nissay is over, it happens every time there's a butai... and I just can't afford to keep doing it any more. Partly I felt as though I had to, since nobody else in the western fandom publicly shares dance family scans, but honestly that's a pretty stupid reason to keep up the habit since it's not exactly like I get paid to do this. I've supported the dance family as much as possible over the last 3 years, but from now on I'm going to reel back to regularly scanning just Yaracchi and Ryota, and possibly a few other people but not regularly, and with no guarantees. Since I love the dance family very much I sincerely hope that somebody else will try to share more in the future. If (if,) there was anyone out there counting on me for scans of 4U, They's H&E, "MAD" or MADE, I'm very sorry, I can't do that any more.

Endless SHOCK is nearly upon us! Please watch out for scans of Yaracchi and Ryota's stage photos as of next weekend :D

On Friday the 2nd round of stage photosets was released at Nissay Theatre! Each cast member got two sets each, bringing everyone up to a total of four sets so far (one original and three stage sets apiece).

I couldn't get more than Yaracchi and Ryota's today and was super in a rush so didn't have the chance to check the numbers for each cast member (although tbh you can probably work it out yourselves since they're in the same order as the last round). Therefore, in this post are only the sets numbered 23 and 24 (Yaracchi), and 35 and 36 (Ryota). My apologies. 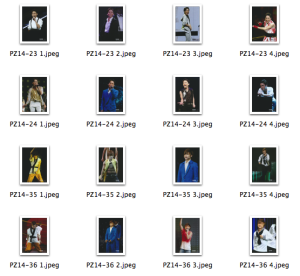 The others will come... after payday 8D As will a report, eventually, if I ever get around to it.

As usual: the photo sets will be available at Nissay Theatre while Playzone is running! Please buy them if you can!

No credit please, no taking the credit, spread the love etc. ♥

P.S. I think I need to start organising my public post tags a little better. Like, by butai or something, idk.

The 13th is over here now but in my head it's still Monday, and Yuma and Kouta's birthdays! Yuma in particular turned 20, which as you know is a very important year in Japan because it's the year you officially become an adult :D Congratulations to both Yuma and Kouta on their birthdays ♥

Today (Monday 13th), the first round of stage photosets went on sale at Nissay. These were numbered 1-20, thus:

You may have noticed that the dance family's birthday boy, Kouta, is not included in the bolded part of this list. This is not out of spite! Thanks to it being his birthday, his stage photoset sold out today :D There will be more printed, but I won't be able to get them until next week. I'm sorry for that; please have patience T_T

Additionally, in this post you may recall me contemplating getting Yuma and TraJa anigumi's original photosets... Well, ( Collapse ) - Yuma, Noeru, Myuto, Hiroki and Ryuya's sets are now here and have also been added to the previous post just to keep things in one place.

The stage photo sets went on-sale today! They will be available at Nissay Theatre while Playzone is running! Please buy them if you can!

No credit please, no taking the credit, spread the love etc. ♥

So here we have, in record time, scans of the original photosets for the Playzone in Nissay January 2014 run! Woo! 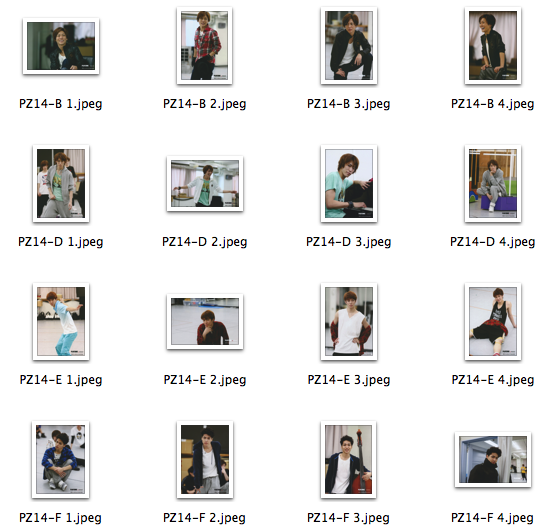 This screenshot is just an example; there are 40 photos total (4 per member, as usual). Nissay do things a little differently to Aoyama, so instead of numbers for PZ this time, the original photosets have letters. They run thus:

Sorry for the lack of TraJa and Yuma :( I'm thinking of maybe getting Yuma's and TraJa's anigumi, but... not sure yet.

These went on-sale today! They will be available at Nissay Theatre while Playzone is running! Please buy them if you can!

As usual, no credit please, no taking the credit, spread the love etc. ♥

Happy new year, everyone :3 There was so much Yaracchi at Countdown this year, did y'all watch it by now? I didn't see it live, just on TV (was at KinKi con instead, where 4U were backing ♥). I hope 2014 is a wonderful year for you all! Don't forget Yaracchi and the rest of the dance family (sans MADE) will be in PLAYZONE in NISSAY from January 6th, and then Yaracchi, 4U and Ryota will be in Endless SHOCK from February 4th! Please support Yaracchi and the rest of the dance family as much as possible in 2014 too :D

Speaking of the dance family... I come bearing scans! I meant to do these ages ago, but. Remember when I said that we had fewer photos per member for Playzone shop photos for '13? And then a few days later they went and released the same amount all over again and I couldn't afford most of them? Yeah, lol. Anyway, way later than intended, here are things...

Obviously I didn't quite get everything, but I hope it'll be enough for now. Since the Nissay PZ starts really soon there will be new photos out argh the cycle never endsssssssssss neeeeeeeverrrrrrrr eeeeeeeeennnnndssssssssss. P.S. can I ship Noeru and Hiroki, is that okay? They are adorable idk. Tell me if there are any problems with any of the files.

As usual, no credit please but no taking the credit for yourself either. Share! BUY! Enjoy :D Comment? 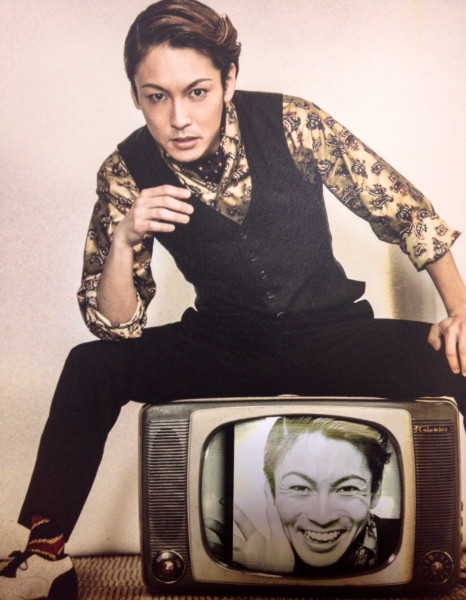 This show is fantastic. I really, really like it. I cannot at all explain the plot without getting hopelessly tangled because a) I don't fully understand it yet and b) it's genuinely complicated anyway, most of my friends also aren't sure about a bunch of stuff (lol). Basically, there's 1970s NY, Eddie (Yaracchi) and Peter (Nakagawa-san) trying to create a musical, their friend Nick, the mafia, fictional characters who may or may not be real and who don't always listen to their script-writer (Eddie)'s instructions, a muse with a weird accent and star potential, asian roommates, and lots of awesome singing... and so on.

I love it T__T I was super apprehensive, because that is apparently how I get about things (remember how I was for Playzone this year too?) but I... really enjoyed it a lot, like, Yaracchi aside it's a really interesting and enjoyable show and then you add Yaracchi to the already-awesome cast and I'm basically sold for life.

A ton of Playzone offshot shop photos were released on Monday (2013 September 9th). Way earlier than last year! Which I'm glad about, because 'I want PZ shop photos' was pretty much my daily chant last autumn :x Everyone got fewer photos than last year, too... Oh well, anyway!

Right now they have their own section in the Johnnys Shop, 'PlayZone' instead of just mixed in with the rest of Jrs or whatever.

btw, I'm sick atm so I gave up on editing dust off scans after a while. If there are any glaring problems (remember that time one of Iketan's pictures got chopped in half? ;; oops) please let me know, otherwise...

A massive thanks to Sheryl for helping me edit things, to Becky for offering to help, and to TL for routinely listening to me whine about all the bloody pictures ♥

tl;dr:
I started scanning these once back in March or something - the Shock ones - and then my laptop died. After that, I had no time, and even less motivation. It's been over two years since I started sharing Playzone stuff, and much longer than that since I started scanning things in general. I'm really grateful to the handful of people who regularly comment when they take files - NOT because I want gratitude or anything like that, but because the whole reason I scan things is because I want other people to like these boys too. I want other people to enjoy them and maybe, hopefully feel like "ah yes, I want to buy their photos/magazines and support them too". I don't ask for credit, I don't even ask for acknowledgement despite the stupid amount of time and money that goes into providing shit for fandom. All I hope to get in response is some kind of feedback, be it flail about your favourite or laughing at Ryota or Yaracchi's hairstyles or anything. If I wanted to receive zero response I could just not bother scanning at all.

In my case, that means I'd really appreciate it if you'd comment or actually @ me on twitter (rather than just tweeting to the open air on the off-chance that I might see it). Getting fewer and fewer comments each time is pretty demotivating, especially when I know people are still downloading and looking at things. Dance family fans, do you even exist? Am I scanning things in vain? Should I just give up and keep the photos to myself and the people irl? I'm not trying to threaten I won't scan things any more if you don't comment!!1!, I'm just trying to explain how discouraging it is to continually try to initiate some kind of interaction and be met with near-silence every single time. I know other file-sharers and the like have similar experiences (unless they fileshare for very popular idols, but even then I know commenting has taken a definite nosedive in recent years). What little incentive there ever was is decreasing with every passing year - and then people wonder why sources die out.

I don't mean just this post, I mean... in general. File sharers aren't paid to share files in this fandom; they're people too, people who put in time, money and effort to try to spread the love for people they also like. It's beginning to ('beginning to') feel as though the world at large is choosing to ignore that.

Anyway, tl;dr over. Let me know if there are any problems with either the scans or the files themselves!

I'm sure y'all have seen them all already, but here are pictures of the Playzone poster in Nogizaka. Click to enlarge. 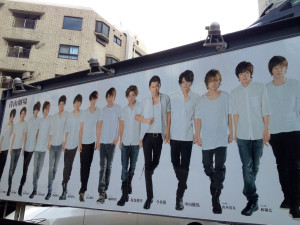 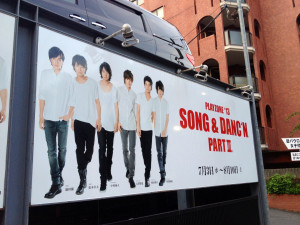 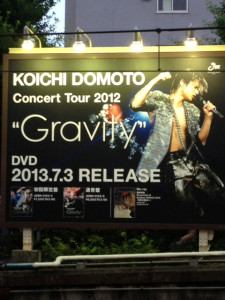 P.S. I forgot to say this yesterday, but the other week I was contemplating an AU in which Tama was an F1 racing driver and Miyata was a pit engineer, and then this week Dream Boys Jet was announced. Screw you, Johnnys, for stealing my fic ideas e_e

via a twitter user, from a poster at the Family Club. Dumping everything here on my LJ because I'm not at home rn (as usual...)